6.1 billion K-Pop-related Tweets in the past 12 months worldwide Over 300 K-Pop Topics (by artist names) that can be followed on Twitter

#KpopTwitter is one of the largest global conversations on Twitter today. Despite the global COVID outbreak, there were 6.1 billion K-Pop related Tweets in the past 12 months worldwide. Now with over 300 K-Pop Topics (by artist names) that can be followed on Twitter, fans around the world can immediately see the best Tweets and easily join the global conversation about their favorite artists.

YeonJeong Kim, Head of Global K-Pop Partnerships at Twitter said, "All we can say is thank you -- it's been a pleasure to watch and participate in the growth of K-Pop over the past 10 years. When K-Pop artists want to reach a global audience, they go on Twitter to connect with their passionate fans who want to be the first to see and talk about what's happening. These fans -- many who are young and based all over the world -- are flocking to Twitter to join these fun

#KpopTwitter conversations to feel connected to a global fan community."

To celebrate 10 years of

K-Pop Radar to release K-Pop data across 20 markets to show how the passionate global K-Pop community shares their love and connects with their favorite artists around the world. In addition, Twitter has organized an exclusive "Decade of

Stray Kids) in a fun talk-show format to discuss the past 10 years of K-Pop and Twitter. K-Pop fans can submit questions using the

#AskKpopTwitter hashtag and join the livestream at

Twitter continues to be the best way for music fans to see and talk about what's happening. That's especially true in the K-Pop world, from legends like

2NE1; to today's superstars such as

MONSTA X; to the next-generation talent including

AB6IX. K-Pop fans use Twitter to get the latest updates from the artists they love; connect with other stans anytime and anywhere in real time; and express their appreciation for the music, dancing and 'Hallyu (Korean Wave)' culture that has taken the world by storm. 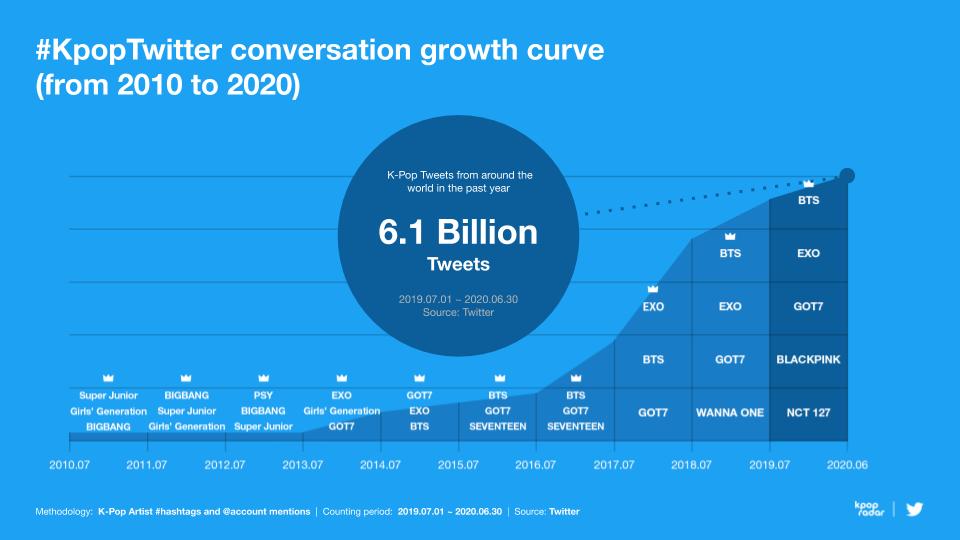 #KpopTwitter is truly a global community as the top 20 markets with the most K-Pop-related conversations (from July 1, 2019 to June 30, 2020) cover every region in the world today: 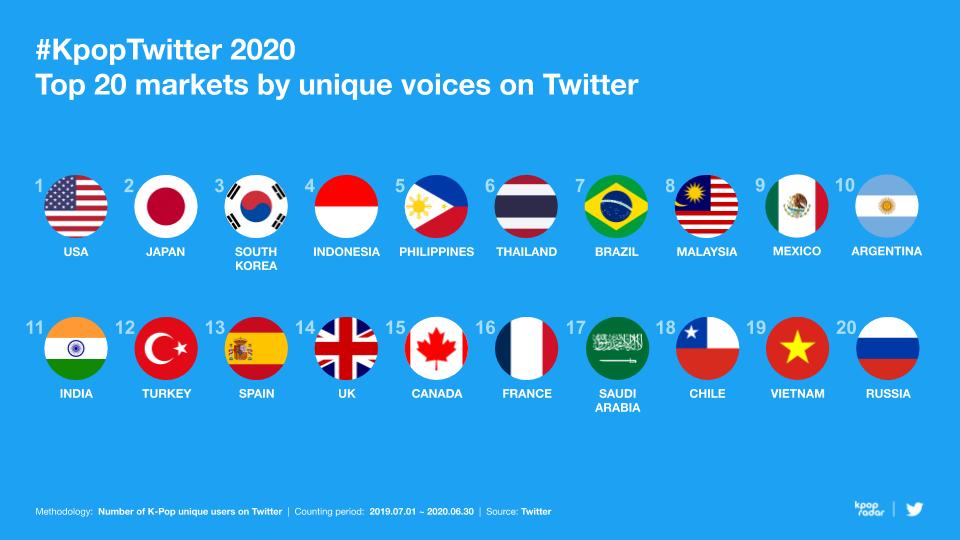 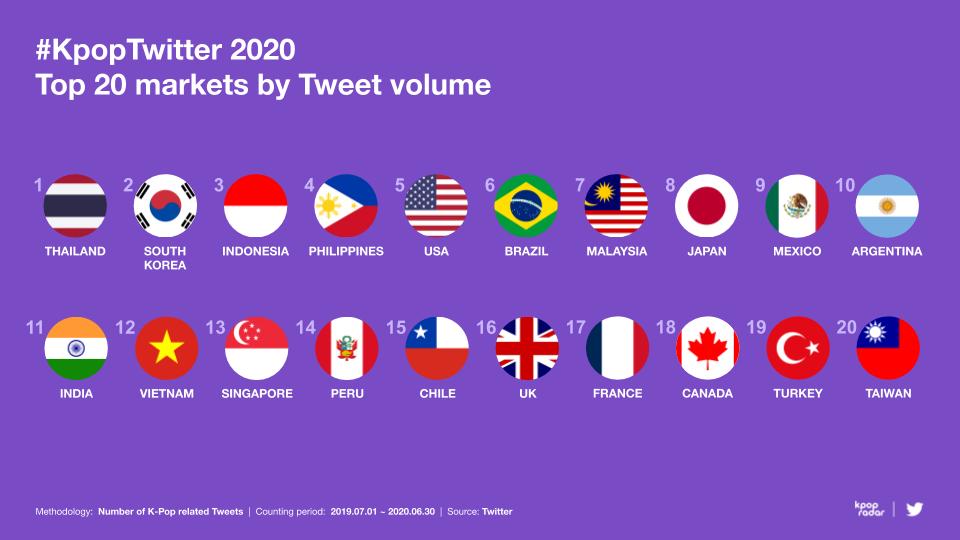 GOT7 topped the leaderboard), the rest of the top 10 most-mentioned K-Pop artists varied by market, showing the diversity of the K-Pop fandom on Twitter around the world (from July 1, 2019 to June 30, 2020): 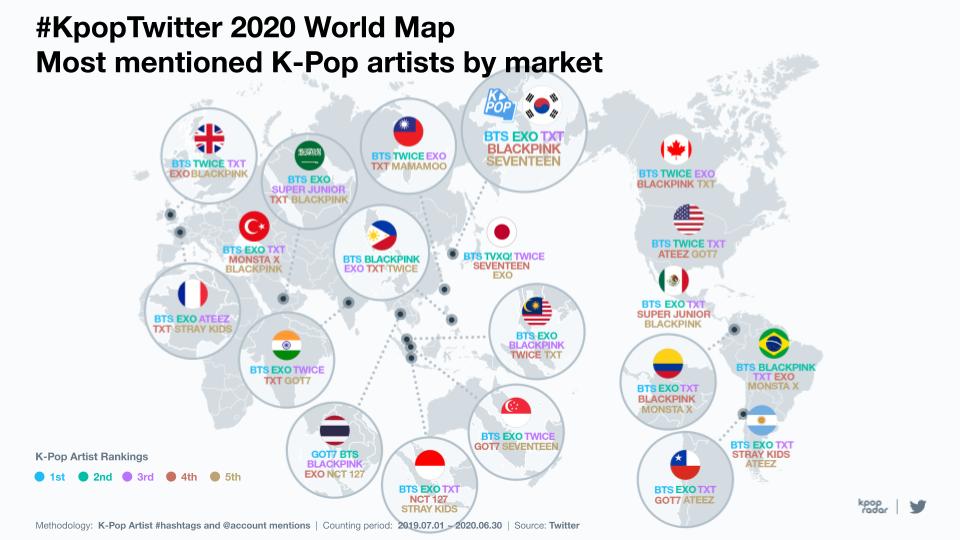 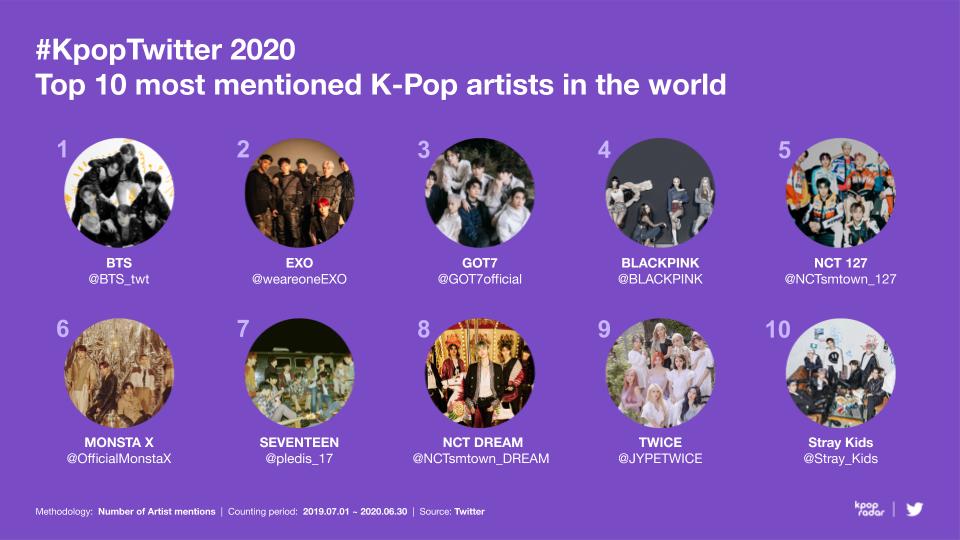 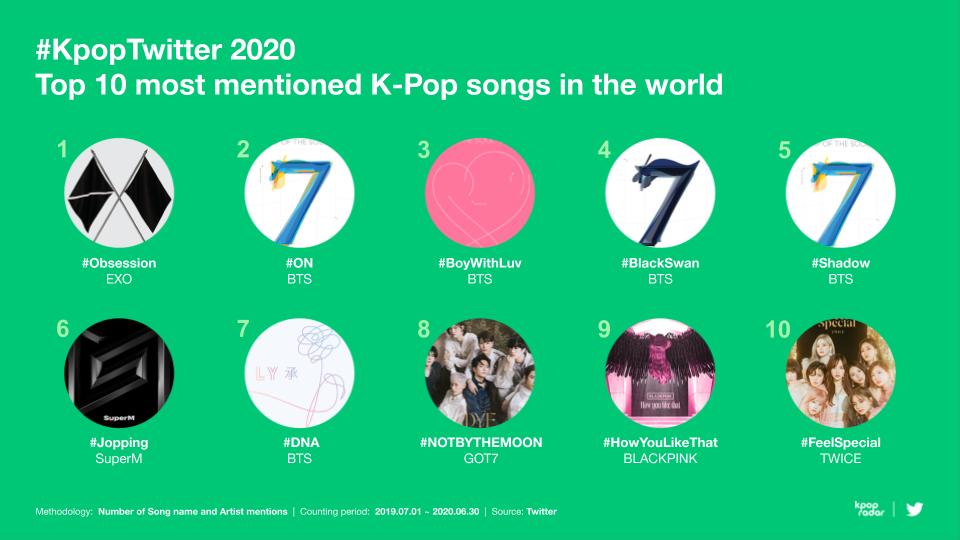 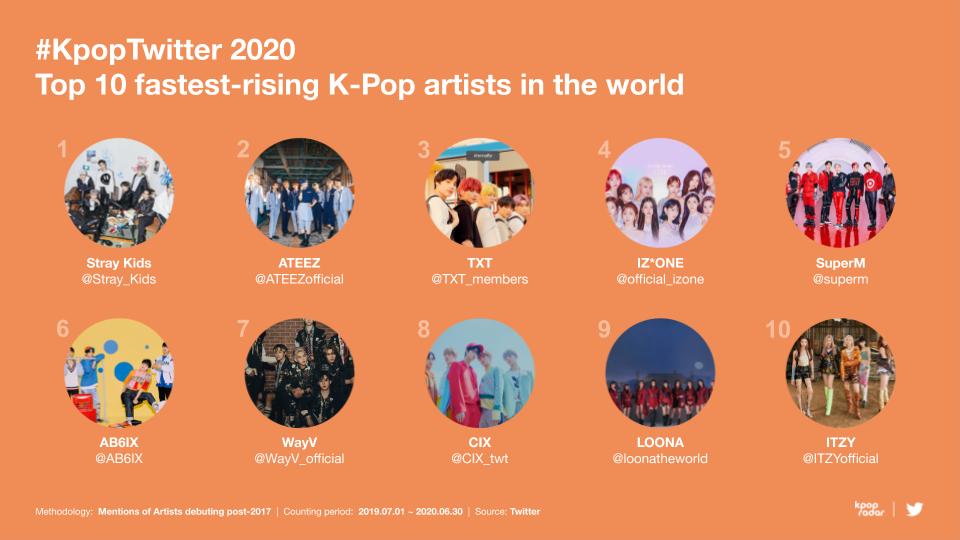 YeonJeong added, "Even during this COVID-19 pandemic when K-Pop concerts, global tours and fan appreciation events have been cancelled, we haven't seen any drop in

#KpopTwitter conversations. K-Pop stans want to stay connected with each other and have their voices heard on Twitter, whether they are cheering for their favorite artist's new song or participating in movements like

#BlackLivesMatter. We can't wait to see what the next 10 years of K-Pop and Twitter bring to the world."

Come and join the fun

#KpopTwitter conversations today to see and talk about your favourite K-Pop artists or follow any of the 300+ K-Pop Topics on Twitter to stay connected every day with other fans around the world!

Twitter (NYSE: TWTR) is what's happening in the world and what people are talking about right now. From breaking news and entertainment to sports, politics, and everyday interests, see every side of the story. Join the open conversation. Watch live streaming events. Available in more than 40 languages around the world, the service can be accessed via

twitter.com, an array of mobile devices, and Twitter Lite (