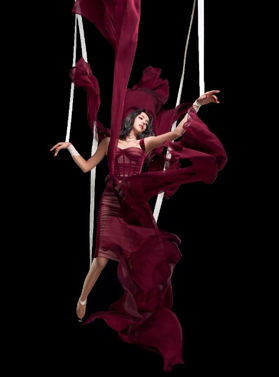 The third episode - “The Puppet” - sees the princess enjoying a stellar music career. All is not well, and the princesses’ outfits grow tighter and tighter, distorting her image. She feels helpless and sad, but the crowd reacts with pure elation to her distorted image. As her hopes of happiness fade, the princess sees a sewing machine in the distance that is crafting the perfect dress. As she reaches out for the dress, she is transformed into a wooden puppet and plunges downward into a seemingly never-ending abyss.

A set of motion and still images centred around the third episode of Tia Lee’s animation series was released on 21 November, marking another artistic coup by Tony C. Miller. Dressed in a red Poem dress and Christian Louboutin heels, Tia is depicted as a puppet. The motion image concludes with her breaking the shackles that are holding her back.

The issuer is solely responsible for the content of this announcement.

Tia Lee Yu Fen (李毓芬) is an Asian pop singer, fashion icon, model, and film and television actress. In addition to her stellar music career and acting roles, Tia has been prominently featured at major fashion shows and in globally renowned magazines, such as Vogue, Elle, Marie Claire and others. She has also appeared at fashion events for some of the world’s most prestigious brands, including Louis Vuitton, Swarovski, and Fendi.